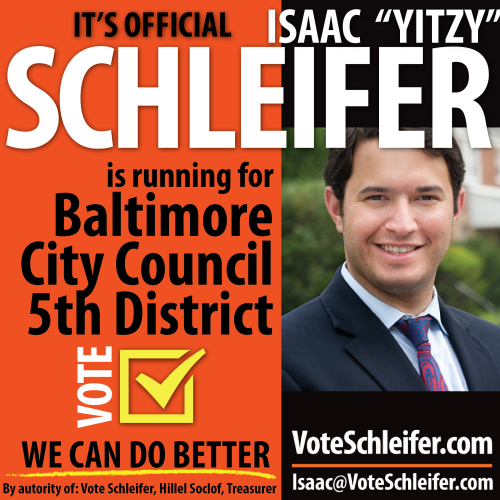 His announcement came several weeks after Schleifer launched an exploratory committee, following months of persistent efforts to enlist his candidacy by business and community leaders in the district. “With their encouragement, I decided to enter the race after careful consideration of the district’s needs, talking to hundreds of residents who are unhappy with the current leadership, and hearing again and again that people are concerned about high property taxes, high crime, and other major issues in our neighborhoods,” said Schleifer.

He noted that in their encouragement that he run, “They pointed to a combination of my private sector work activities and my strong community activism, which they believe will provide fresh ideas and strong leadership to take Baltimore City in a new direction.”

A life-long resident of the district, Schleifer is a small business owner who is the Vice President of the northwest Baltimore City’s Cheswolde Neighborhood Association and who sits on the Board of Directors of Myerberg Senior Center, Hebrew Free Loan, Suburban Orthodox, is on the advisory council with the BSSP community safety organization, and was recently appointed to serve as a community liaison to the State’s Attorney’s Office. He is also involved with the American Red Cross and numerous other organizations.

“We should not be afraid to get out of our cars after dark or to sleep in our own beds at night. We should not be paying higher property taxes than every other jurisdiction in the entire State of Maryland, money that we could be using to buy our kids school supplies, pay for car repairs, or put food on the table,” he said. “It shouldn’t be cheaper and safer to live in Baltimore County and we shouldn’t be forced to move. I’d rather work to improve the city for everyone.”

In June, Schleifer was recognized by Mayor Stephanie Rawlings-Blake as a Top Neighborhood Dad. The selection was based on honoring dedicated men who have given selflessly to keep Baltimore’s neighborhoods better, safer and stronger. “As I raise my family here, I understand how important it is for our tax dollars to be working for us, and coming back to our own district. After watching children in other parts of Baltimore get the summer lunch program year after year, I stepped up and helped bring it to our district. And I know there are other programs and resources that we can – and should – be bringing to our own neighborhoods, and I will fight for them.”

Added Schleifer, “As residents flee the city, it’s time to take back our neighborhoods and be proud to call Baltimore City our home.”